Hank Aaron: A Ripple in the Lake

17 years ago I got a phone message from my friend Ray Quesnel. Ray and I worked together at Asheville school and he’d been a mentor to me in my brief but fun JV baseball coaching career, as well as my launch as a boarding school faculty member.. The message was short and concise: Please call me right away.

I called Ray back immediately. I was nervous, a little apprehensive perhaps, but when Ray answered the phone he was so excited—giddy in fact. In the happiest, gleeful, childlike, full of wonder way, Ray answered the phone and he said you’ll never guess: You’ll never guess who’s going to come speak to our commitment class this year. I think he wanted me to guess but he was just too excited and he couldn’t help himself when he said “Hank Aaron is coming to speak to our graduating seniors in June.” He was so excited and I shared his excitement. We were like two little puppies running around having been separated for days. But we were over the phone. It was that level of joy and excitement.

Ray and I worked together for many years before he departed Asheville School. At the time his departure was hard to understand. In retrospect it was a great transition for Ray and his family. As an educator and as a leader his career took off, but it was sad when he was leaving. I gave him a copy of Hank Aaron’s autobiography, I Had a Hammer: The Hank Aaron Story. 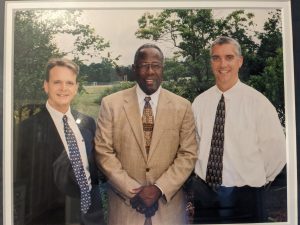 I first got to know about Hank Aaron when I read his autobiography. His life story had deeply touched me. It included a heroic baseball career followed by leadership positions in the Civil Rights Movement as well as being a successful businessman. His baseball records still stand today. He’s the home run king and the RBI leader. In major league baseball, having 3000 hits is a huge deal. If you took away all his home runs (755), he still has over 3,000 hits. Total bases can be measured in distance, and someone did the math and deduced that if you lined up his total bases the endpoint would be more than 12 miles beyond the next closest competitor. Talk about outdistancing the competition. He won Gold Gloves and a World Series Championship. He was as great a baseball player as there ever was. Certainly on the Mount Rushmore of great hitters.

But what I took away from his biography was how he used the unpleasant and horrible moments in his life to make his and others lives better. He had many unpleasant moments. He was an early Black major league baseball player after Jackie Robinson broke the color barrier. During this time, he weathered many of the types of hatred that Jackie Robinson endured. When he began to approach Babe Ruth’s record of 714 home runs, bigots and racists came out of the woodwork to communicate with him their deep hate for him and his family. Racism is never attractive, but this raw, in your face way, it’s hard to believe that someone could not only have those feelings but write them down and mail them. He kept the letters. Certainly it was hurtful and hurt him. But more importantly he found a way to turn all of that hate into power, real power. Not bragging, not boasting, not even talking a great deal. He turned that hate into action. To this day I find it epically inspirational and as great an example of resilience but I know of.

But when I think about Hank Aaron, I wonder about the size of his rock, the size of his lake, and the enormity of his strength. As a public figure I think we have all underestimated the size of his rock, the size of his lake, and his strength. His lake was the biggest lake that there can be, maybe the ocean or sea. He was a public figure for almost all of his life and for I’m sure 50 years he lived on the biggest of stages. As television’s reach and impact grew, that stage got bigger. Not once, not one single time have I ever heard anyone say he acted poorly or acted regretfully. I think if any of us knew the degree of disrespect and pain he endured we couldn’t comprehend it. And he never acted out, he never behaved badly. He always went with his best self. How admirable. I challenge myself and you to do as well.

Can you think of a bigger rock than breaking Babe Ruth’s home-run record? I don’t think there is one. That’s the rock that Hank Aaron threw. He accomplished many great things on the baseball field, the Civil Rights Movement, and in business. But breaking Babe Ruth’s record is the single event the people look to most. It symbolizes not only A++ athleticism coupled with remarkable focus and durability, but it also symbolizes something significant racially. Babe Ruth is a legend. An imperfect but lovable legend. Babe Ruth was white and adored by the white press, teammates, owners, and fans. He was the baseball legend. All others were in second place. Babe Ruth was dramatic. Hank Aaron’s strength was tremendous power with great consistency and durability. Types of strength that leave the biggest of impacts and perhaps the smallest of headlines… real power.

So what do you think of Hank Aaron’s strength, the size of his rock, and the size of the lake? Here’s a little bit more perspective on how far the ripples went out into the world. Ray Quesnel and I are white and and we are probably two of the people who are of the least consequence in Hank Aaron’s far-reaching life. We met him and had pictures taken in 2004. I imagine there wasn’t a day in the last 50 years people didn’t get their picture taken with Hank Aaron. Can you imagine that? And yet my friendship with Ray was buttressed by Hank Aaron’s biography and we celebrated our friendship with his Commencement Address. For both of us it was a big day in our lives. For me, getting to meet my all-time hero was a dream come true. It was also a thrill for my friend Ray to meet Hank Aaron and to be able to share that moment with me. If Ray and I are the smallest of impacts…the least important…the ripples at the very edge of the lake. What must it have been like at the center?

An honest sincere thanks from me to you Mr. Aaron. you will always be my hero. The strongest man in the biggest lake with the biggest rock. Oh the ripples you produced not only for your fans, but for mankind.

Listen to my latest podcast episode about Hank Aaron here . 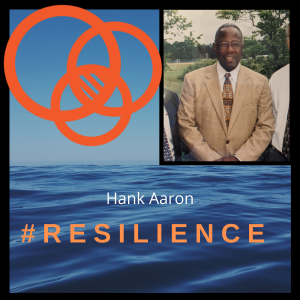 100 things White people can do to make a difference